Hanover, capital of Lower Saxony, was built in the Middle Ages on the banks of the River Leine, as a small fishing village. Soon, however, thanks to its location, it became a thriving city dedicated to trade, as it has remained to this day. 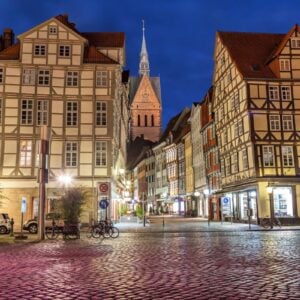 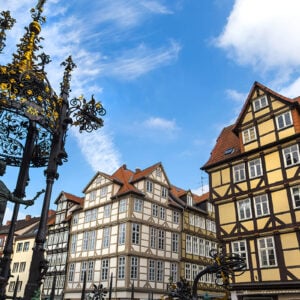 You really mustn’t miss the “Marktplatz”, the main square of Hanover, rebuilt almost completely after the Second World War with wooden Tudor-style houses.
Here you can find the “Old Town Hall” (“Altes Rathaus”), built between 1400 and 1500 that survived the bombings. There is also the “Market Church” (“Marktkirche”) with its 97-metre high tower from which you can enjoy great views of the city centre.

The “New Town Hall” (“Neues Rathaus”) in Trammplatz was built in the 20th century and is both the mayor’s residence and the location for periodic cultural events . At the entrance you will find 4 scale models of Hanover in different eras: Medieval, in the 20th century, in 1945 and today.
The building also gives you a panoramic view of the entire city because the observation point is situated on the top of the dome , which is 93.5 metres high.

are the city’s main attraction. This place was built more than 300 years ago and is one of the largest Baroque Gardens in Europe. The central part, which is also the oldest, has not undergone structural changes over the years and is now home to numerous concerts.

The “Museum of Lower Saxony” in Hanover, is opposite the New Town Hall and is multi-themed; the artistic area contains artefacts and paintings, while in the natural area you can admire an enormous vivarium with different species of animals and fossils.